The Kerala Chapter of PMI (Project Management Institute) is guiding Pallium India’s alumni students (who were once receiving Pallium India’s education support) to make them more competitive and employable, and help them discover more opportunities in their relevant fields.

The first career guidance workshop by PMI was conducted in October 2019.

The second workshop of PMI was conducted at Pallium India on 23rd February 2020. This time we could bring in more number of our alumni students, and it was attended by 13 of them along with PMI volunteers, Pallium India volunteers and staff.

Mr. Sreejesh Varrier and Mr. Jayakishore gave a talk on how communications could be made effective and how well we can introduce ourselves. This was followed by a round of self-introduction by the students which was well coordinated by Mr. Prageeth, Mr. Vyshak and Ms. Nimmy. The students also spoke about a particular topic given to them which was recorded and shown back to them. PMI Members guided the students on how better the self-introduction could be made and added on relevant concerns after each talk. 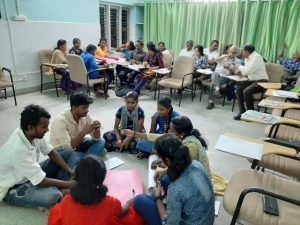 The afternoon session was on “Skills for future” by Dr. Jaikiran from ASAP, Department of Higher Education, Government of Kerala. The session included a group activity on promoting an innovative idea in which all the students have taken active part. Later, Dr. Jaikiran explained about the 10 core life skills laid down by WHO and about the success formula for future.

The students found the sessions informative as well as fun. They especially found their own videos of self-introduction interesting and were able to learn from each. Hoping to have such educational and recreational sessions in future from PMI.

The value of our Committee for Applied Ethics

We know that several palliative care centres are struggling with various ethical issues in relation to patient care in the context of the COVID crisis. [...]

Committee for Applied Ethics – for the time being, for COVID times

Health care providers cannot shut down services. It is simply unacceptable. As unacceptable as soldiers deserting their posts or the police refusing to work. In [...]

The World Health Assembly (WHA), the decision-making body of WHO, in their annual meeting on 18 and 19 May 2020, committed governments to deliver palliative [...]

With rising numbers of people getting COVID 19 and many dying from them, we could face the situation that Italy did – of not having [...]