On 23rd January 2017, I was honoured to present two esteemed palliative care colleagues, Dr. M. R. Rajagopal, Chair of Pallium India, and Ms Kseniya Shapoval from the International Renaissance Foundation in Kiev, Ukraine, to the United Nations Commission on Narcotic Drugs in Vienna. They spoke to UN member states about the need to improve access to medicines for pain and palliative care in their respective countries.

Essential palliative care medicines such as morphine, which relieve a patient’s pain when rationally administered, are controlled under both national law and under the international drug control treaties. Restricting their access “except for medical and scientific purposes” takes a lot of resources. So-called developing countries are still in the process of learning to divert from police control and repression to evidence-based public healthcare.

Dr Rajagopal spoke about how 99% of Indian people who need it have no access to palliative care, although a rupee’s worth of morphine could support a terminally ill young child and bring his family some peace. Ms. Shapoval said that she had been honored to be on the Ukraine delegation to CND last year, and to the UNGASS in April 2016. “Speaking as a member of the official delegation, I have to note that the involvement of public health specialists and NGO representatives in the work of the delegation and in parallel sessions within the special session, made it possible to implement a balanced approach to access to controlled medicines in Ukraine. In particular, to look at the problem not only in terms of the fight against drugs, but also in terms of human rights.”

In the case of controlled medicines, implementing Chapter Two of the Outcome Document means a government must commit funds to the education and training of healthcare workers, and re-drafting legislation to modernise and allow more rational prescribing practices. This aligns them with the evolving interpretations of international law that are pro-public health rather than pro-repression, which evidence shows has negative impacts on public health and human rights. As access to controlled medicines is unduly restricted for multiple reasons, in many countries, including India and Ukraine – violating human rights to health, and to be free from torture, cruel, and inhumane punishment – advocacy must be focused at the international, as well as national, levels.

The Commission on Narcotic Drugs, based in Vienna, Austria, is the UN agency that oversees how countries are implementing the three drug control treaties, which regulate medicines such as morphine and methadone for palliative care, along with cannabis and heroin. Last year CND approved a resolution, which was later approved by the UN General Assembly, called the UNGASS (UN General Assembly Special Session on the World Drug Problem) Outcome Document. It has an entire chapter devoted to improving access to controlled medicines, with six operational paragraphs and multiple practical recommendations. Governments now need to implement the recommendations and report back to the CND over the course of the next three years. They need the help of civil society organisations such as Pallium India to do this. Pallium India is involved in a network of global palliative care organisations that are also linked to the international drug law reform organisations that participate regularly at CND.

During multi-day meetings called “intersessionals,” the CND has been reviewing the implementation of each chapter, and has allocated four slots for civil society to address progresses and challenges in each chapter, alongside member states. This is an unprecedented opportunity for member states to learn from palliative care leaders about what is happening in the ground in their countries. As governments rely on civil society to provide them with information, advocacy organisations need to present experts in as many fora as possible.

Consideration of the other five thematic chapters in the plenary began with presentations from the relevant divisions in UNODC and the International Narcotics Control Board (INCB) followed by member state interventions, and civil society. Delegates responded positively to Dr. Raj and Kseniya’s presentations and will be able to access them on the UNODC website. Unfortunately, because the intersessional took place at the same time as the WHO Executive Board meeting, WHO staff could not be present for the meeting, but will give an update during a technical briefing in February.

We will have speakers from other countries at upcoming sessions of CND, and a large side event at the annual meeting in March. For more policy information, sign up for our free regular story on policy in the IAHPC Newsletter. 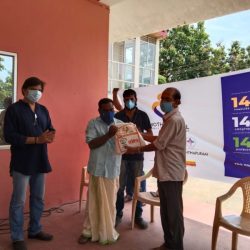 The draft National List of Essential Assistive Products (NLEAP) prepared by Indian Council of Medical Research (ICMR) does not include the updated definitions of blindness, hearing impairment, etc.

The Role of Social Workers in Palliative Care

A professional social worker plays an important role in palliative care as they provide the vital link between the clinical team, the society, the patient and his family. 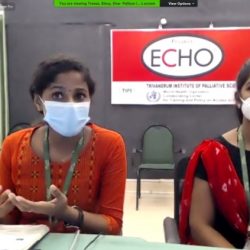 India, ranked 129 out of 158 countries in the Commitment to Reducing Inequality (CRI) Index by Oxfam, spent just 4% of its budget on health going into the pandemic -- fourth lowest in the world.